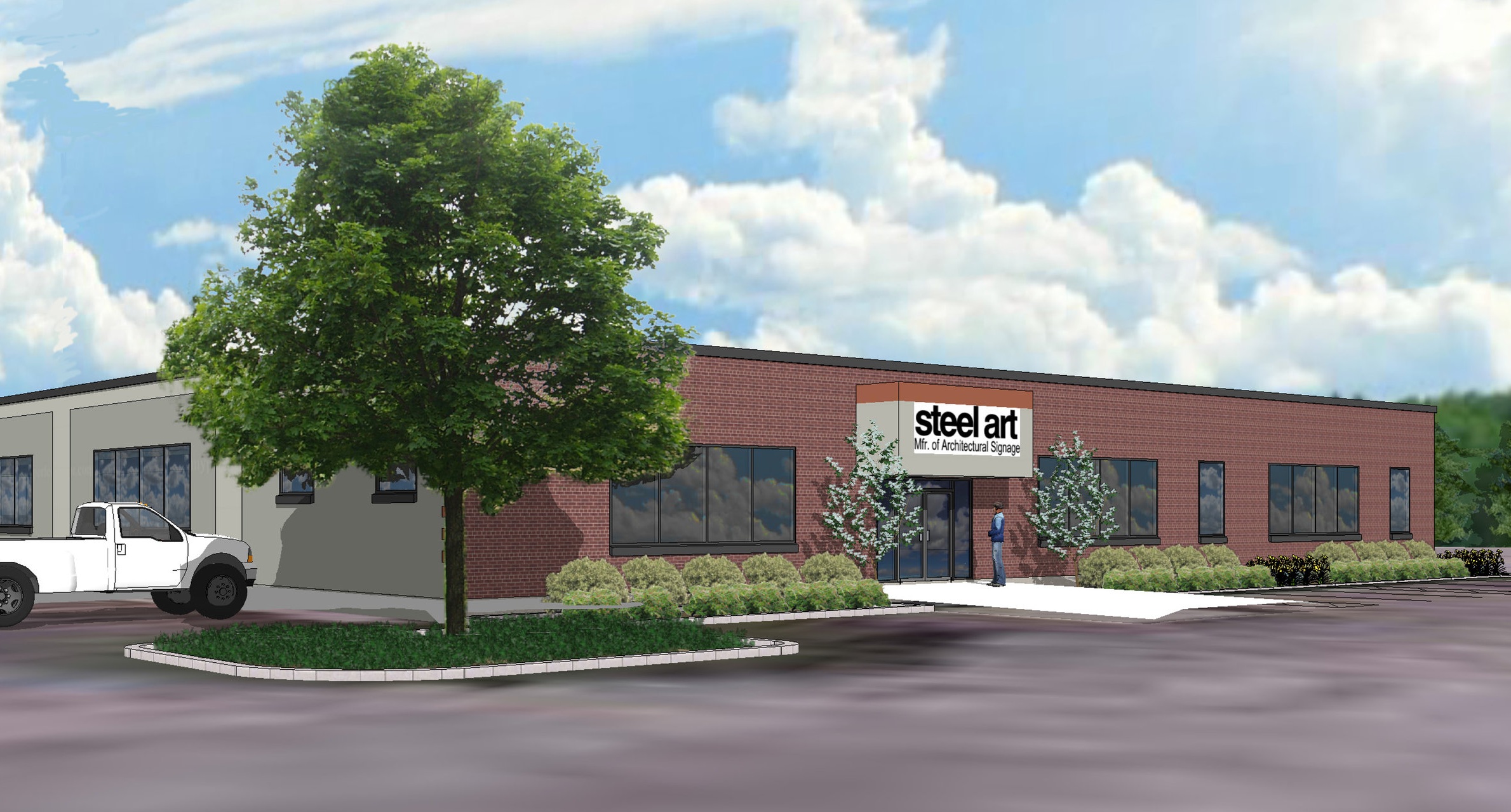 Steel Art is the premier full-service manufacturer to the sign trade. From materials selection to mounting details, our goal is to ensure that each customer receives a quality experience. We realize the crucial importance of that quality, which is passed down to your customer. With a history of more than six decades in the industry, we understand what it takes to deliver unparalleled expertise and service. Let us help you impress your customer. When you work with Steel Art, success is always found in the details. Look close.

Norbert Borell and his beloved wife Blanca were married in Krakow, Poland, just prior to the outbreak of World War II. When the Nazis invaded Poland, Norbert, Blanca, and their families were rounded up and interned in Hitler’s death camps. Incredibly, after surviving years of inhuman atrocities in multiple camps, Norbert and Blanca were reunited soon after the liberation of the camps by the Allies in 1945. Having lost nearly all of their family members in the Holocaust, the two made the decision to emigrate to America in 1948 in order to start a new life. The couple eventually settled in Peabody, Massachusetts.

Upon their arrival, Norbert took a job working in the tanneries of Peabody. It was grueling, dirty work with long hours and limited pay. After a time, he was contacted by a fellow survivor of the camps who had emigrated to Canada. This man happened to be skilled in the manufacture of metal letters. He urged Norbert to come to Canada to work with him, which Norbert agreed to do. After learning his craft over a few years, Norbert returned to the United States, and, in 1952, opened a tiny shop in the spare room of a barber’s shop at 1436 Commonwealth Avenue in Brighton, Massachusetts. He named his new business Steel Art Company.

Slowly, Norbert built up his sole proprietorship. His background as an engineering graduate in Poland proved extremely useful, particularly when faced with challenging installations. As a result of his incredible work ethic and dedication, his reputation for quality and dependability began to grow and so did the workload. Soon, the barber decided to relocate and Norbert was able to add the storefront office to his growing shop. During these early years of the business, Blanca tended to their young children John and Barbara, and also chipped in by handling the accounting duties for the office. Most of Steel Art’s workers at this time were men who were moonlighting from their full-time jobs and working in their off hours.

Finally, in 1962, Norbert was able to secure a major contract to provide signage and lettering for the Massachusetts Turnpike Authority and the Massachusetts State Police Barracks. He was now able to take on four or five permanent employees at Steel Art Company. It was also around this time that his son, John, began coming into the shop to assist in any way he could.

By the mid 1960’s, Steel Art Company was on a roll. Suddenly, the small backroom company in Brighton was being specified by architects and general contractors to handle extensive signage work for new construction projects all over Boston and the surrounding area. Hospital buildings, university buildings, bank buildings, and municipal buildings began springing up like weeds, and they all needed a dependable subcontractor for their signage.

As Norbert’s son John grew older, he began taking on more tasks for the Company and learning the operation. Although he went off to college in Maine in 1968, John often returned to help his father at Steel Art whenever possible. By this time, Norbert’s health was failing and he asked John about his interest in taking over the business. During his first few years of college, John wasn’t sure he wanted the company to become his career. However by his senior year, he realized this would be his only shot to keep the family business in operation. So after John graduated one Sunday in spring, he was on the job the next day.

While John had been away at college, his sister Barbara met Stewart Dobson, a student at Boston College. Soon John and Stew became friends and in September of 1973, John asked Stew to leave his other job and join him at Steel Art Company. Not knowing anything about the sign industry, Stew was apprehensive. However, he soon found his calling in the area of sales recruitment after spending weeks driving around the Boston area hunting down sign projects with Norbert. When Norbert suddenly passed away in March of 1974, Stew became the man in charge of the sales department for Steel Art Company. He was a one man show. It was also at this time that he discovered his hidden art talent. Soon he was drawing most of the cutting programs by hand and penning the shop drawings for the pulling of permits. With all of his new contacts in the area, Stew was urged to join the Massachusetts Sign Contractors Association, later serving 12 years as its president.

It was after joining this organization that Stew realized most of the local sign companies had no one to manufacture custom metal letters for them. It was then that he started making inquiries and Steel Art began taking on work for a number of local shops. With all of this extra work, it became apparent that Steel Art had outgrown the former barbershop space in Brighton. So in 1984, John and Stew took a leap of faith and purchased an 18,000 square foot space at 75 Brainerd Road in neighboring Allston. Not sure they needed the entire space, they initially rented half of the building to a local cable television company, but within a year they realized they needed every inch of space for Steel Art Company’s new operation to commence.

In 1987, Steel Art Company made perhaps its largest step forward by purchasing its first abrasive water jet machine. In one fell swoop, the 13 operating band-saws became a thing of the past. Not only did the water jet handle all of the regular cutting jobs,it allowed Stew and John to experiment with cutting materials such as granite, glass, and even marble. Soon they were showing off their amazing samples to architects, designers and local sign companies in order to create a demand—and that they certainly did.

In recognition of their potential capacity with the water jet technology, John and Stew made the decision in 1989 to transform Steel Art Company from a sign company and installer, to a manufacturer for the sign industry. It was then that the Steel Art Company, Inc., as we know it today, was born. This entire change of approach meant that Steel Art would need to expand its reach nationally. This, they realized, would require the services of an eminently qualified sales director to market Steel Art’s name and products throughout the country. The man they were looking for arrived that year: Charlie Blanchard.

When Charlie arrived in March of 1989, he began by putting together a national business model to make Steel Art competitive around the country. After that, Charlie was on the road almost constantly, meeting people from all of the different sign associations around the country. He eventually joined the International Sign Association (ISA), where he ended up serving on the board of directors for six years.

Throughout the past 25 years, Steel Art has survived market collapses, recessions, increased competition, and major changes in the sign industry as a whole. We’ve added new water jets, lasers, and all of the modern devices used today in the manufacture of signs. We’ve hired new people of diverse backgrounds, each of whom have added something important to Steel Art. Through it all we have tried to remain true to our principles of providing the highest quality product and the best service in the industry. As a family-owned company, we have also succeeded in retaining a high level of accessibility and personal rapport with our valued customers.

As a result of these years of progress, and thanks to our wonderful customers, we find ourselves today in a beautiful, new, state-of-the-art facility conceived by John Borell over his 40+ years as president of Steel Art Company. For the family of Blanca and Norbert Borell, the building of this structure remains extremely personal. It stands today as the realization of a dream started by a husband and wife, who after surviving the unthinkable, journeyed to this wonderful country more than six decades ago after losing everything — except of course one another.